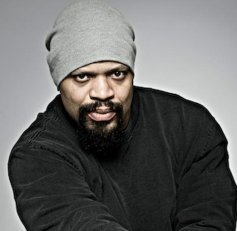 Mic Crenshaw Portal at the Alliance

Jason Sayre is with Michael Crenshaw.

In front of the Portland, OR Walmart on SE 82nd Ave.,
today in solidarity with UFCW local 55!

Produced for (Program name):  One Two, One Two

Mic Crenshaw is the former Station Co-Manager for KBOO Community Radio (2014-15), and is currently the Hip-Hop Outreach Coordinator.

Mic is an independent Hip Hop artist, social justice activist and educator who combines his skills and passions into what is called Cultural Activism.

Crenshaw was a co founder of Anti Racist Action in the late 80's and has been teaching in schools and universities since then. Mic is the Lead Organizer in the U.S. of the Afrikan Hiphop Caravan and has toured numerous African countries as an artist and organizer.

Mic is the Political Director for Hip Hop Congress and co founder of Global Fam, an organization that partnered with Education Without Borders to establish a computer center in Burundi Central Africa.

Mic Crenshaw continues traveling with the Caravan: a transformative experience for everyone!

In 2014 it occurred to me that some of the youth I mentor through Hip Hop education in the US should have access to this incredible opportunity.

In 2015 I invited Baqi Coles, a high school senior in Portland to participate in the Caravan. Through crowdfunding, public events and an award from the Traditional Arts Apprenticeship Program, Baqi and I were able to tour with the Caravan in Kenya, Tanzania, South Africa and Zimbabwe.  Baqi was able to perform, write and record with African artists at every destination."

In 2017 a compilation album was released featuring artists from Tanzania, South Africa, Kenya, Zimbabwe and the US.
Both Baqi and Mic contributed to the album while on tour with the Caravan.

and the Diaspora Sol Hip Hop Conference in Havana Cuba in 2018 (https://latinousa.org/2018/06/07/diasporasolconference/) as an ambassador
for the African Hiphop Caravan.

Within a couple of weeks, Micah Fletcher and I will have our new album available digitally:

"When Micah Fletcher co-founded Last of a Dying Breed with veteran Portland rapper Mic Crenshaw, he was well aware the project's attention wouldn't be limited to his dexterous lyricism.

In the summer of 2017, Fletcher was one of three men who stepped in to defend the young women targeted by Jeremy Christian's anti-Muslim rant on a MAX train, and the only one of the three to survive the stab wounds Christian inflicted. In the months after the attack, Fletcher watched comment sections unfold on local and national news stories about the incident. Some commenters claimed he was an actor deployed in a conspiracy against far-right politics, others praised his actions with such veneration that extremists from the right mockingly dubbed him "St. Fletcher."

In April, Crenshaw and Fletcher released what would become their first single off of Brink of Distinction, "Paradox," a swaggering anthem with a back track of scratched records and a wobbly guitar melody supplied by one of their de facto producers, Theory Hazit."On the song's chorus, Fletcher recites: "The truth is a paradox/Revolution is a marathon." It's one of the album's many condensed bits of wisdom, and a line that was partly inspired by both MCs' confrontations with white supremacists that occured generations apart. "It's a serious reminder that things don't go away," says Crenshaw."

Fletcher is 23, Crenshaw 48. The two met in 2015 through their overlapping roles as Portland poets and rappers. Crenshaw has mentored Fletcher since then. According to Crenshaw, the cross-generational similarities between the two MCs are much more profound than an affinity for hard-hitting verses... 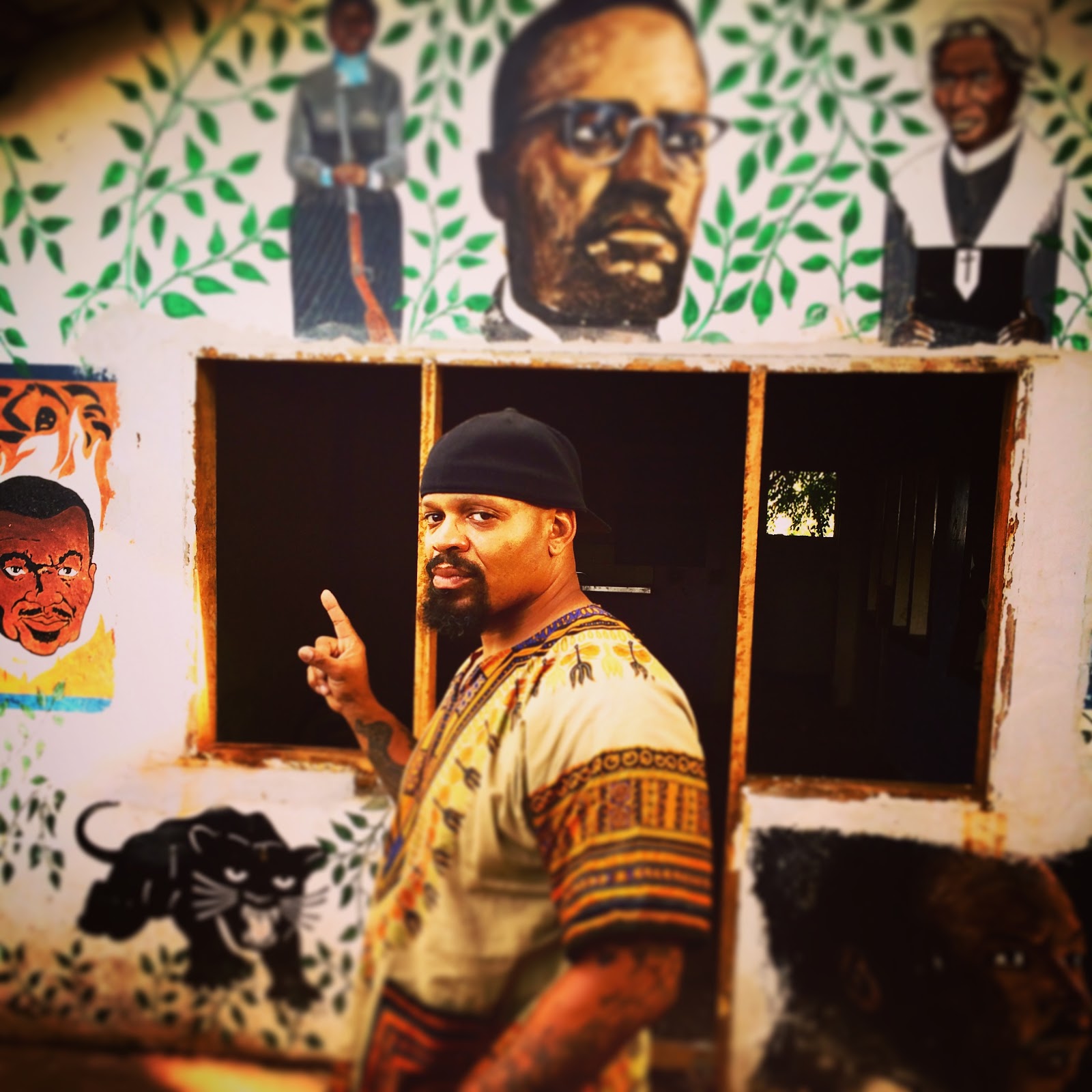 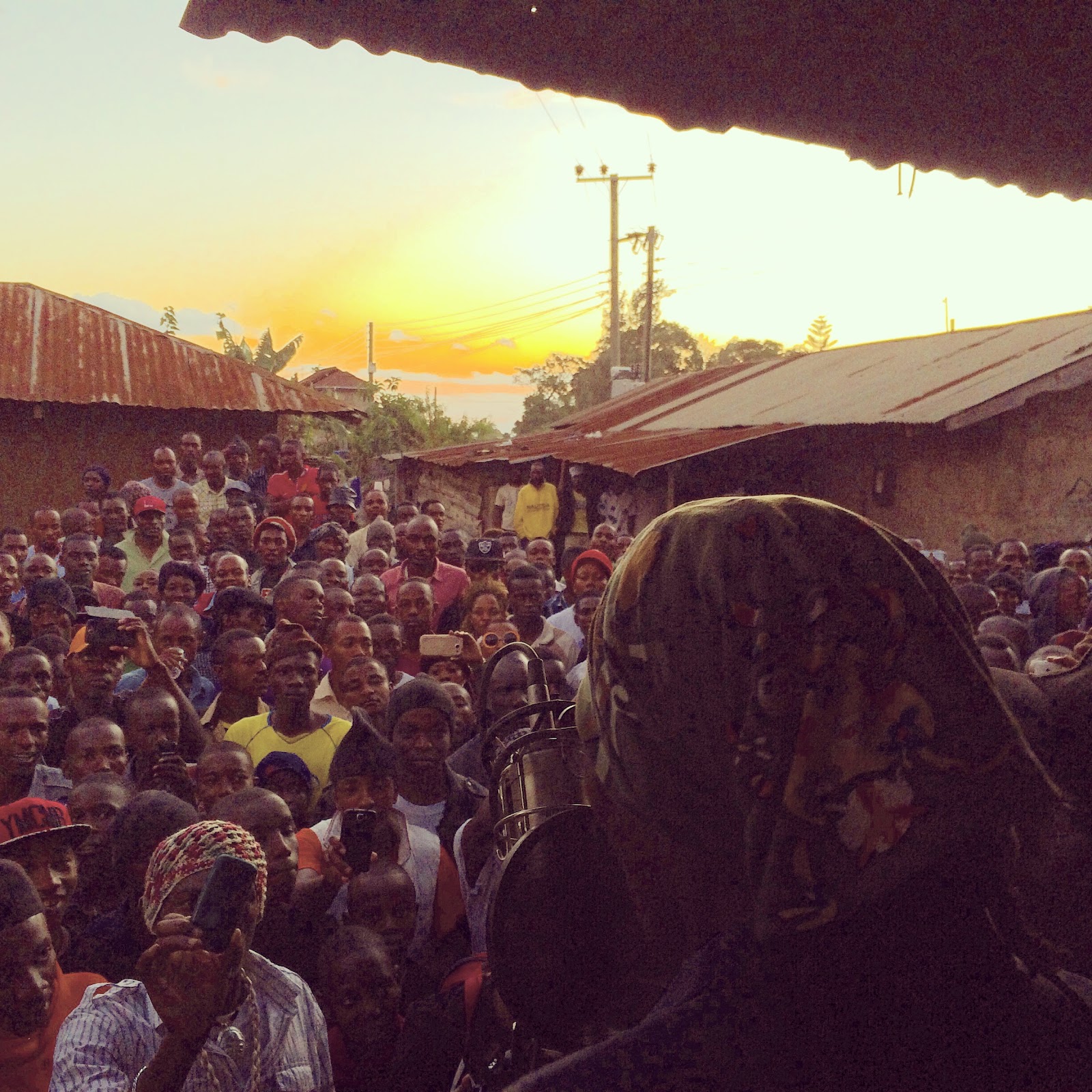 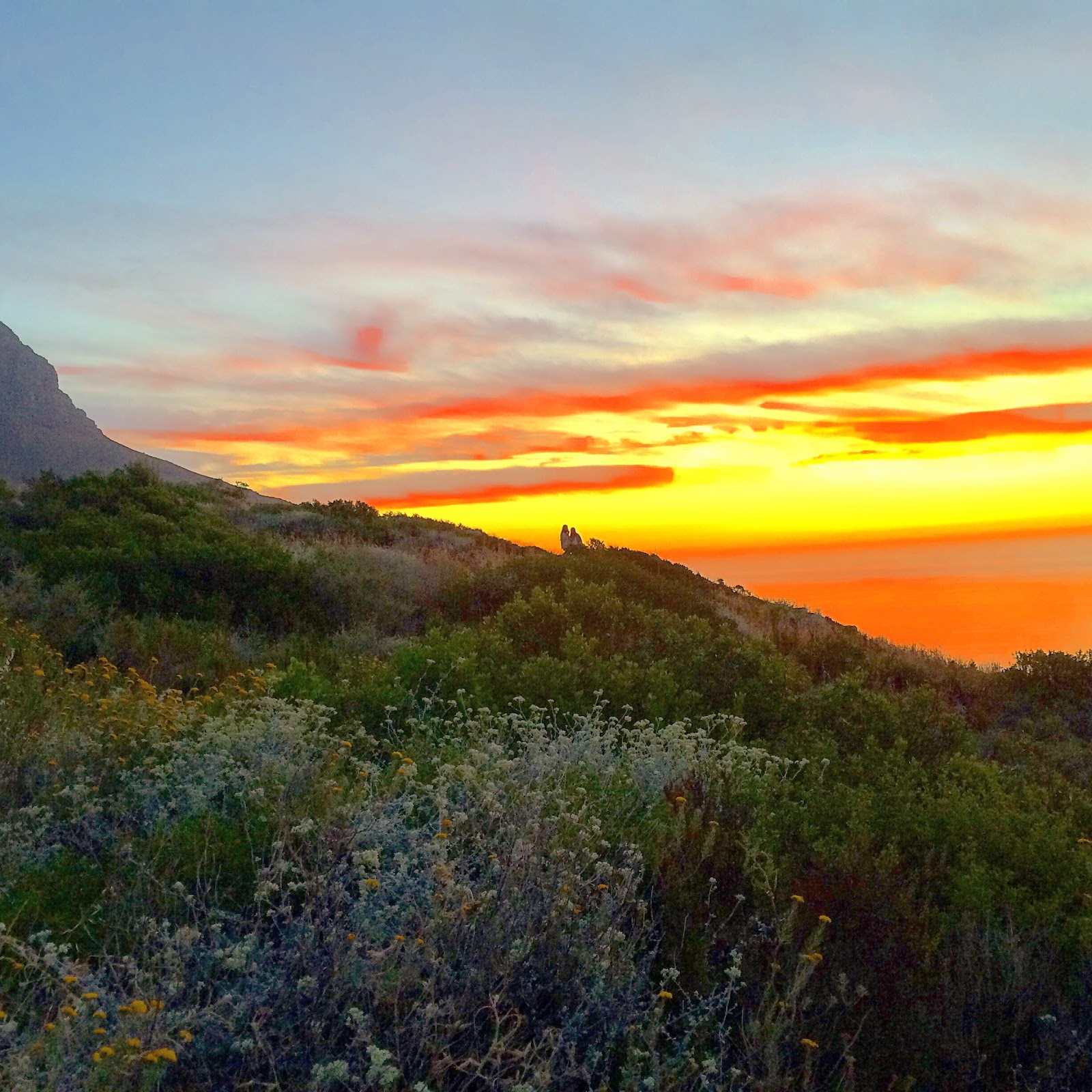 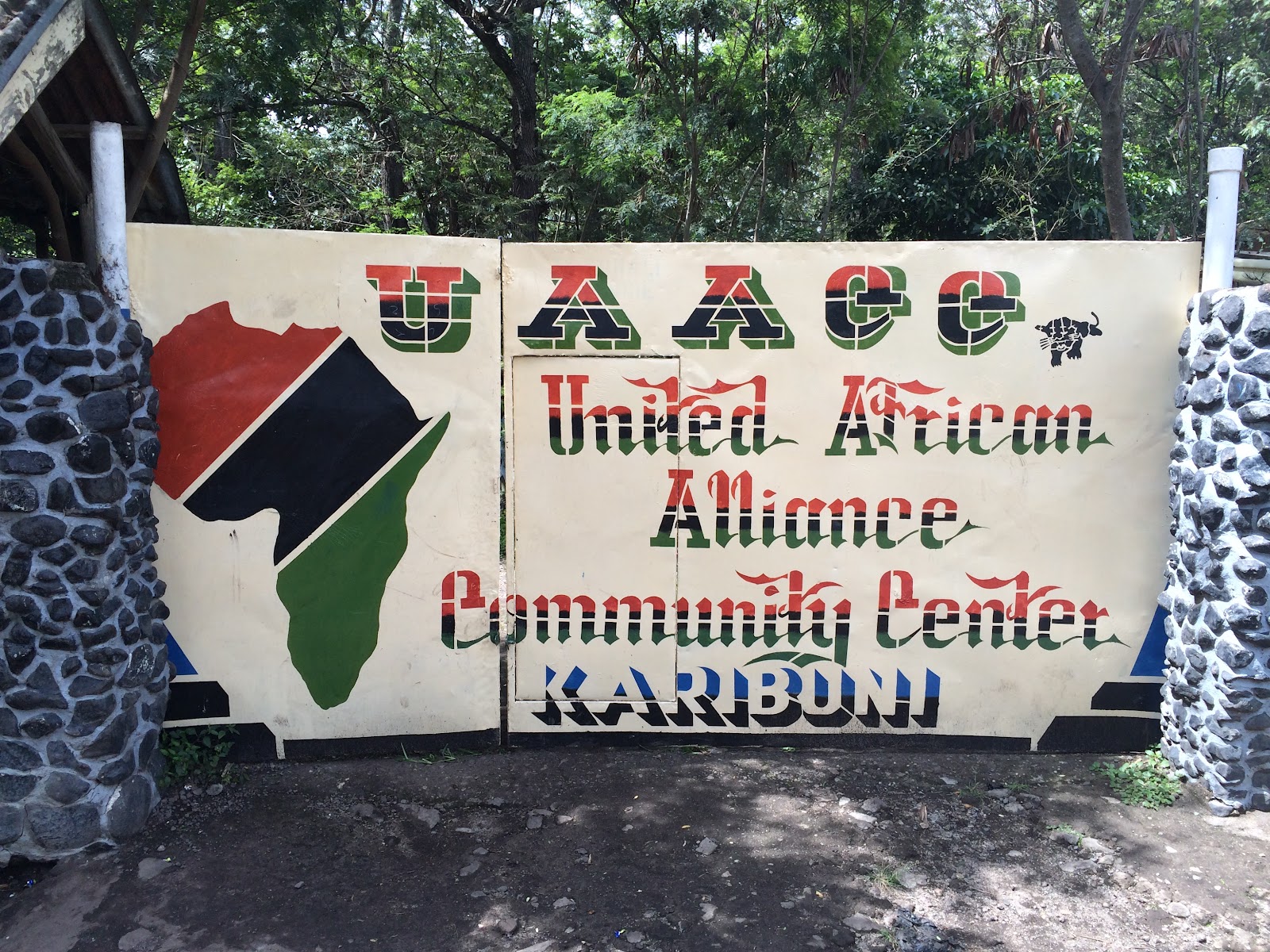 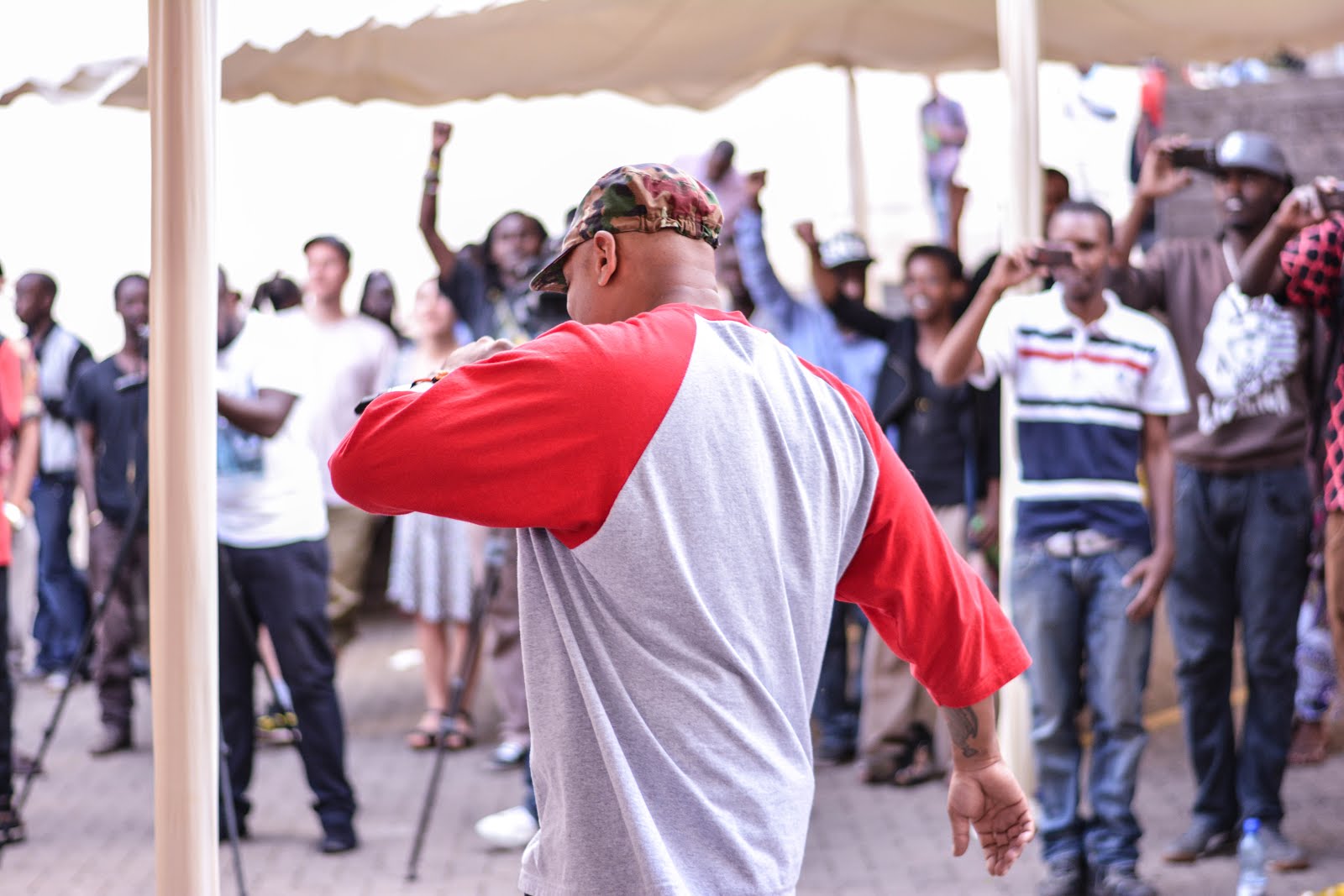 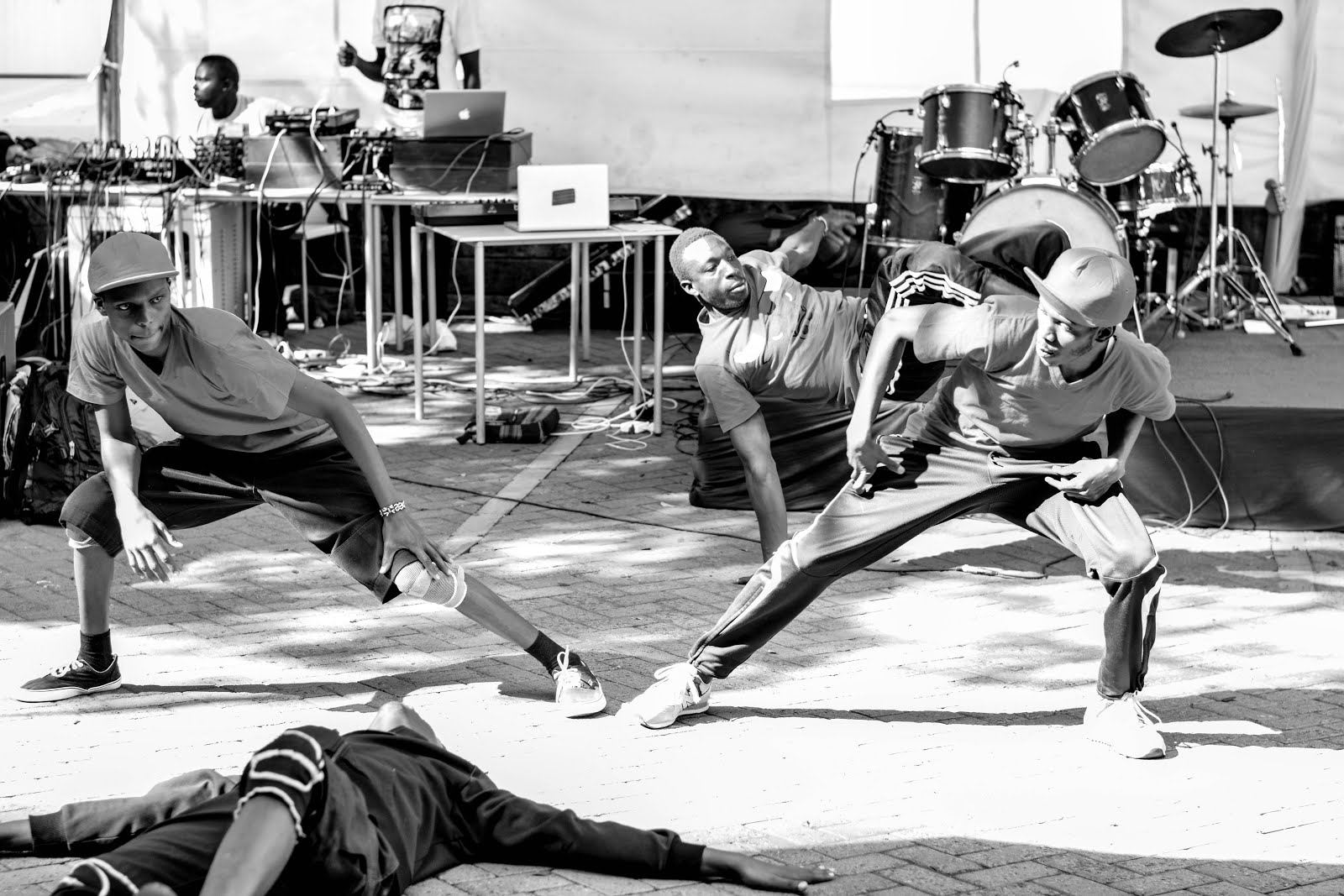 The shots above are: Me at the UAACC in Tanzania outside of one of the buildings. A stage shot of the crowd in Arusha at the Hiphop Slam.
A Cape Town sunset looking toward Lion's Head. The gate of UAACC in Tanzania. Me rocking the crowd at the British Council in Nairobi, Kenya; taken by Irene of Azzurah photography. The B-boy crew at the British Council performance in Nairobi Kenya, for AHC 2014, shot by Irene of Azzurah photography.

There we were hosted by Mzee Pete O’neal and Charlotte ‘Mama C’ O’neal. These two are someof the most inspiring people I have ever met. The community center itself is in a walled compound in a small village in the beautiful countryside in the foothills of Mt. Meru about 45 minutes outside of Arusha. At the Center there were always plenty of youth who were the students and graduates the UAACC leadership academy, lots of good food and opportunities to record in the state of the art recording studio on the premises. Mama C and Brother Pete are Black Panthers who have lived as political refugees in Tanzania for over 40 years. Mama C’s contribution to the local Hip Hop scene in which she still participates is deep and well respected.

During the course of the week in Tanzania we would commute back and forth from the Center to town to work with the artists of the S.U.A. (Saving Underground Artists) Collective:https://www.facebook.com/SuaTanzania and Okoa Mtaa Foundation (Arusha, Tanzania). There was more recording, a newspaper interview and cyphering with some of the best emcees on the Continent. The show outside of Watengwa studios was one of the highlights of the tour. From about 2pm on, the crowd steadily built until dusk when it was easily about 800-1,000 people packed onto the streets and parking lot where the stage was surrounded by colorful graffiti murals. It was amazing watching  the local artists captivate the crowd with powerful, humorous and engaging performances in english and Kiswahili.

The last stop of AHC 2014 was in Nairobi Kenya, by far the biggest city of the tour this year. Khusta and I were hosted by Douglas Rori, a local videographer, documentary filmmaker, former emcee and Kevin Ovita Teddy, both part of the Wasanii Mtaani Artists in the Hood Collective.

The vibe in Nairobi is a quick, metropolitan pace and it felt closer to the vibe of Manhattan New York at rush hour than anywhere else I’ve been in Africa.

The British Council hosted a number of events at their facility including a youth debate with members of the Kenya National Debate Council and panel discussions about Youth Engagement, entrepreneurialism, and Hip hop and Democracy.

There was a radio interview on one of Kenya’s biggest radio stations 98.4 Capital FM and a skype conference with Native Sons a Hip Hop act from London. We performed once at the Ebony Lounge in the Central Business District and once at the British Council with local acts  and a live band including members of Nairobi’s veteran Hip Hop crews, Ukoo flani Maumau and Kalamashaka. The local Hip Hop promoter and legend Buddah Blaze, largely responsible for introducing Hip Hop to Kenya booked some of our media engagements, the show at the Ebony Lounge and took us out on the town introducing us to Nairobi’s nightlife. Insanely fun and non stop. It was a fitting way to wrap up a month on the road in 4 African cities in 4 countries in 2 regions. Dynamic performances, events and new relationships that will continue to elevate the Caravan on a global stage.

What is the purpose of the AHHC?  Taken from the website: hiphopcaravan.net:

The Afrikan Hiphop Caravan is an annual project organised by various Hiphop collectives to allow thousands of young people to experience Hiphop Culture at its’ finest: as an elevating form of of expression, a creative and revolutionary counterforce to all forms of oppression. Its vision is to build a strong and united Afrikan Hiphop Movement based upon a cohesive network of Afrikan Hiphop collectives with strong ties to like-minded organisations worldwide.

The participating collectives, which currently include Soundz of the South (Cape Town, South Africa), Uhuru Network (Harare, Zimbabwe), Okoa Mtaa Foundation (Arusha, Tanzania), Asrafo Records(Lome, Togo) and Wasani Mtaani (Nairobi, Kenya), are dedicated to Hiphop’s original vision as the voice of the oppressed and understand it as an acronym standing for ‘Her Infinite Power Helping Oppressed People’. In its essence, Hiphop is understood as a counterculture that has potential to educate, to build revolutionary consciousness, and to challenge the ruling class.

Thus, key aims of the project are (1) to build a sense of agency and self-empowerment among politically-conscious, community-based Hiphop artists, who often due to challenging socio-economic realities and political repression feel marginalized and isolated; (2) to transcend borders to enable artists and activists to share their skills, resources and struggle experiences; (3) to create alternative platforms for dialogue between activists, artists, academics and working-class communities.

In each city, the respective host collective organises two key events: (1) a Hiphop Slam and (2) a Hiphop Conference. While the aim of the slams is to offer a platform to cultural activists to speak about relevant issues afflicting their communities, the aim of the Conferences is to offer a unique space to scholars, artists and activists to debate the state of African Hiphop by exploring a whole range of topics, including Hiphop’s relevance to youth empowerment, identity, and political emancipation.

The 2014 Afrikan Hiphop Caravan started in Cape Town on November 7th and moved to Harare, Arusha and Nairobi.

We hope that the Afrikan Hiphop Caravan continues to grow and that in this process, cultural activists transcend the borders of Africa.

If you want to support our project, please click here(http://www.gofundme.com/afrikanhiphopcaravan)

For more information about the first Afrikan Hiphop Caravan 2013 that took place from February to March in Cape Town, Johannesburg, Harare, Nairobi and Tunis please follow the links below:

published in collaboration with the Journal of Hiphop Studies: