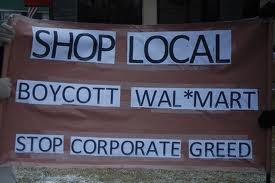 Workers at Fred Meyer, Albertsons, and Safeway grocery stores across the state of Oregon are gearing up to go on a massive strike in a struggle not only for a fair contract in general, but specifically to ensure that women at Fred Meyer are no longer pushed into lower paying wage scales than men. That. Is. Amazing.

On August 2, 2019 from 6-7pm we will be flyering in support of grocery workers who are gearing up to strike all across Oregon in a struggle for equitable pay. We will be at five Portland area Fred Meyer stores in NW, North, NE, and SE Portland, and Clackamas.

Please click this link for specific location and address information, and to fill out the brief form letting us know which stores you are willing to be at. https://forms.gle/miWb4SKLAuXZzYmy8

The joint review of key research papers from the past seven years indicates that the opening of a Wal-Mart in New York City would likely eliminate more jobs than it creates, result in the loss of independently owned small businesses, and create an increased burden on taxpayers.

“The history of the last decade tells us that Wal-Mart stands to be our City’s Trojan Horse,” said Public Advocate Bill de Blasio. “Wal-Mart’s record of driving small businesses out of town and paying below-poverty line wages to its employees will only exacerbate the current decline of New York City’s middle class. We must do everything we can to spur job creation in New York City, but that does not include opening our doors to a proven job-killer.”
picture from source:  https://www.popularresistance.org/new-report-wal-mart-destroys-local-economy/

“Studies from all across the country show that Wal-Mart’s arrival does not bring the increase in jobs and retail spending that the company promises,” said Brian Paul, Center Fellow and Masters of Urban Planning Candidate at Hunter College. “Instead, Wal-Mart captures spending from existing stores, driving them out of business and replacing existing retail jobs with lower-paying Wal-Mart jobs. This is not only about one store in East New York. Wal-Mart is planning a massive expansion into urban markets. Allowing one Wal-Mart to enter New York may open the floodgates and devastate small businesses in neighborhood retail districts throughout the city.”

rest of the story... https://www.popularresistance.org/new-report-wal-mart-destroys-local-economy/

Really Walmart?
Calling the police on your own workers.

Meet Ismael Nunez, an 11 year associate who has been standing up for better working conditions at Walmart for it’s associates and customers. Understaffing in the store and associates earning a living wage are just some of the things Ismael has been speaking up about.

Recently, Ismael was disciplined for productivity despite being tasked to do the job of several people. What’s more, a manager called the police on Ismael and had him escorted from the store. Walmart managers at the Klamath Falls store wanted to send a clear message to workers: if you speak out, you will be disciplined.

Walmart should be rewarding hardworking associates like Ismael not calling the police on them.

Ismael Nunez, an 11 year associate has been standing up and speaking out for better working conditions at Walmart.   He is a leader in the movement for $15 & full time at Walmart.

In retaliation of Ismael speaking out, Walmart suspended Ismael without pay.  What’s more they called the police on him to have him escorted from the store!

Tell Walmart to put an end to the silencing of workers when they speak out.   Reinstate Ismael today!

Ishmael was one of the brave workers who participated in a three day strike last November to fight for better wages, working conditions and protection from retaliation.

Get the rest of the story here: http://www.sojwj.org/home/2015/01/25/really-walmart-calling-the-police-on-your-own-workers/

"After three years with the company, McLaughlin earns only $16,800 a year. "And I'm considered high-paid," she says. "The way they pay you, you cannot make it by yourself without having a second job or someone to help you, unless you've been there for 20 years or you're a manager." Because health insurance on the Wal-Mart plan would deduct up to $85 from her biweekly paycheck of $550, she goes without, and relies on Medicaid to cover her son, Gage.

Complaints about understaffing and low pay are not uncommon among retail workers -- but Wal-Mart is no mere peddler of saucepans and boom boxes. The company is the world's largest retailer, with $220 billion in sales, and the nation's largest private employer, with 3,372 stores and more than 1 million hourly workers. Its annual revenues account for 2 percent of America's entire domestic product. Even as the economy has slowed, the company has continued to metastasize, with plans to add 800,000 more jobs worldwide by 2007.

Given its staggering size and rapid expansion, Wal-Mart increasingly sets the standard for wages and benefits throughout the U.S. economy. "Americans can't live on a Wal-Mart paycheck," says Greg Denier, communications director for the United Food and Commercial Workers International Union (UFCW). "Yet it's the dominant employer, and what they pay will be the future of working America." The average hourly worker at Wal-Mart earns barely $18,000 a year at a company that pocketed $6.6 billion in profits last year. Forty percent of employees opt not to receive coverage under the company's medical plan, which costs up to $2,844 a year, plus a deductible. As Jennifer McLaughlin puts it, "They're on top of the Fortune 500, and I can't get health insurance for my kid."