Portland, OR -- Friends of the Public Postal Service --
Just drove up 122nd near NE Glisan and discovered that the Staples store is no longer there !
That's the Staples Store we took over on June 20, 2014, remember (see photos)?
The number of Staples Stores in Portland is down from 3 to 2 and none have a postal counter in them, yet.
Staples stock is down, the Staples merger with Office Depot has stalled, Staples stores are closing.
The Staples Boycott is working !
For more info go to http://www.apwu.org/issues/stop-staples
Or contact Rich Shelley, rshelley@apwu.org
Solidarity !

Date: September 23, 2015 To: Postmaster General Megan Brennan From: USPS business customers and other postal patrons in Portland, OR Since your appointment as Postmaster General in January of this year you have shown a greater willingness than your
predecessor to pay attention to the concerns of the people who depend upon the United States Postal Service. Therefore
we respectfully request that you respond with clear, unequivocal answers to the following questions:
1. Since the USPS has already closed the Salem and Pendleton mail sorting facilities and has announced the impending
closure of other sorting facilities in Springfield/Eugene and Bend, Oregon, how many additional days of delay can we
expect for the delivery of first class mail (including Official Oregon Election Ballots) and standard mail in Oregon? 2. Are not such delays in direct violation of the law which states that “in determining all policies for postal services,
the Postal Service shall give the highest consideration to the requirement for the most expeditious collection, transportation,
and delivery of important letter mail” and that “programs designed to achieve overnight transportation to the destination of important letter mail to all parts of the Nation shall be a primary goal of postal operations.” (US Code, Title 39, Part 1)? 3. What is the rationale for the lowering of postal delivery standards earlier this year when, according to the Postal
Service’s most recent Financial Reports, USPS revenues have exceeded operating expenses for the past 3 years? 4. When will USPS increase its revenues by offering public postal banking at its 33,000 local post offices across the United
States, as recommended by the USPS’s own Office of Inspector General, and further promoted by U.S. Senator Elizabeth
Warren and others? If not, why not? If so, when can we expect this new service to begin? 5. The USPS has begun locating post office facilities in Staples stores throughout the country, while at the same time
closing, or shortening the hours of operation at, regular public post offices. Does USPS plan to keep public post offices
in the approximately one-third of the 41,000 Zip Code areas where there is no Staples store? 6. What is USPS doing to maintain current standards of mail security while eliminating jobs performed by sworn,
career Postal Service employees and putting low-wage, high turnover Staples employees in charge of the US Mail? 7. The Postmaster General who preceded you pushed plans to eliminate at-the-door delivery, to the dismay of the frail
and elderly. Do you plan to push for this disastrous policy as well? 8. Is it true that the increasing curtailment and degradation of postal services by the leadership of the USPS (Including the elimination of full-time postmaster positions in 13,000 post offices and the current move to study drastic cuts in hours of
operation in 5,000 mostly rural post offices—37 in Oregon) is a part of a plan being pushed by USPS competitors to
prepare for the eventual break-up and privatization of the people’s postal service? The above questions were prepared on behalf of postal customers by Portland Communities and Postal Workers United, portlandcommunitiespostalwork@gmail.com, 503-752-5112 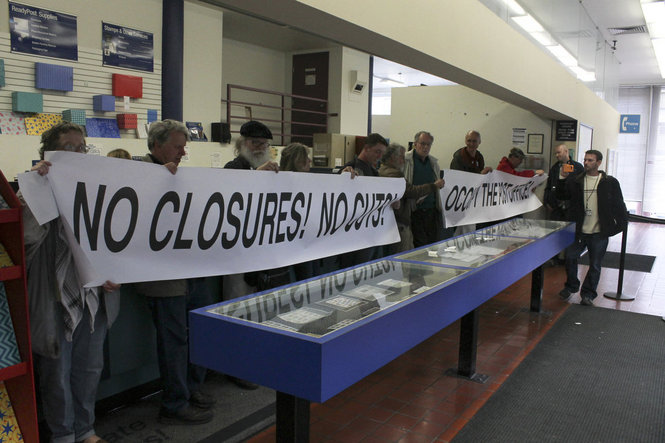 Postal Defenders
ON TRIAL in PDX

Immediate Release Oct. 31, 2014
POSTAL PROTESTERS CHARGES DISMISSED
More actions planned to stop the delay of mail
The “postal defenders” won a reprieve on Halloween. County Judge Karin Immergut dismissed criminal charges in a civil disobedience protest case which was over two years old, saying the defendants’ constitutional right to a speedy trial had been violated.
The protesters immediately turned from celebrating their victory to organizing for a Veteran’s Day, November 11th action, calling on the Postmaster General to halt the scheduled closure of half the nation’s remaining mail processing plants and to retain existing delivery standards, rather than delay America’s mail. The rally, which will also honor veterans’ involvement with the postal service, is slated for noon at Portland’s Waterfront Park.
https://www.facebook.com/events/304852693054323/
Ten protestors – including Rev. John Schwiebert, Jamie Partridge, Jack Herbert, Trudy Cooper, Rev. Michael Colvin, Tim Flanagan, and Ann Huntwork -- were arrested on criminal trespass charges inside the now-closed University Station post office on May 24, 2012. While peacefully holding banners which called for “No Closures, No Cuts” and “Occupy the Post Office”, the ten – members of labor unions, faith groups, neighborhood organizations, small business owners, a disabled vet, retirees and the Occupy movement – refused to leave until postal management agreed to keep postal facilities open and full service.
Over two years later, after a legal fight that went to the Oregon Supreme Court, the occupiers had hoped to get their day in court before a jury. The activists would have argued that they had tried every other means available – letter writing, phone calls, Congressional visits, rallies, marches, petitions, community hearings, City Council resolutions – but had been unable to stop the dismantling of the postal service by the Postmaster General (PMG).
The protestors planned to argue that, in refusing to leave, they were attempting to stop the closure of one-half the nation’s mail processing plants, the gutting of service at half the country’s post offices and the delay of mail.
The defendants will continue to argue that the real criminal is the PMG, who violates the Constitution (Article 1, sec. 8), Title 39 and Title 18, sec. 1701 & 1708 of the US Code by willfully obstructing & delaying the mail.
Honor Veterans! Don't Delay America's Mail!

82 mail processing plants are set to close. Post offices are being "out-sourced" to Staples. Saturday and at-the-door delivery are threatened. And seven postal defenders are on trial for occupying a post office (University Station) to save it. Support the defendants and the peoples' postal services.
Free speech, human rights and civil rights are on the table.   https://www.facebook.com/events/434272496711167/?ref=22
(The trial begins Monday and may continue through Friday)

More information about attempts to cripple, undermine and privatize the US Postal Service http://www.ThePortlandAlliance.org/postoffice 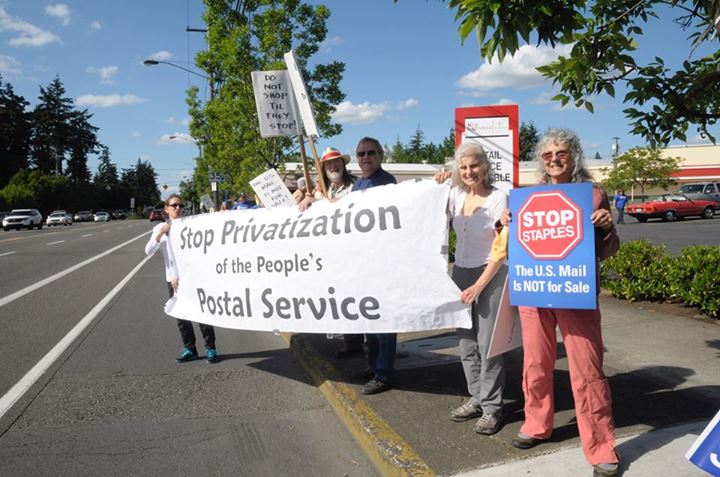 82 mail processing plants are set to close. Post offices are being out-sourced to Staples. Saturday delivery & at-the-door delivery are threatened. And seven postal defenders are on trial for occupying a post office (University Station) to save it. Support the defendants and the people’s postal service!