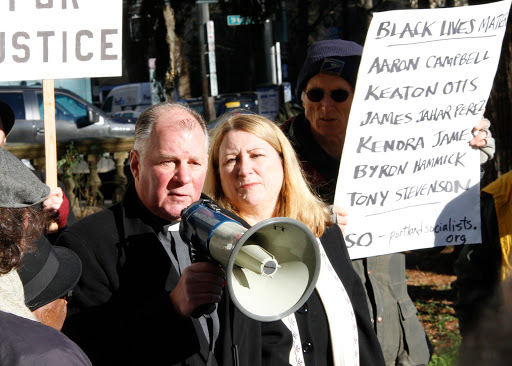 Angie Jones and her three children had emerged safely from her Sandy Terrace apartment.
Portland police Sgt. Liani Reyna said she was ready to "walk away" from the situation as long as an officer in contact with Jones' suicidal boyfriend could get him to promise he wasn't going to hurt himself.

Officer James Quackenbush sent text messages to the boyfriend, Aaron M. Campbell.
"Aaron, we need to know if you intend on hurting yourself," Quackenbush texted.

Campbell responded, "Never. Wow you guys text too. You get kudos."

The situation was under control and it looked like a happy ending.

... Officer Frashour arrived at the scene later than the officers in charge. He was not wearing an earpiece to listen to radio communications even though he had his radio microphone on his lapel. He said he wasn't involved in any police planning and didn't know much when he arrived. He knew the suspect was black but he didn't have a detailed description.

So Officer Frashour, because he was scared, shot Aaron Campbell in the back.

"The City eventually does try to do the right thing by firing Frashour but guess what, he gets reinstated with at least $188,000 in back pay after an arbitrator rules Frashour had followed police procedure."

At 11:30 AM on Decmeber 31, 2015 crowds gathered to protest the reinstatement of Frashour. This reinstatement continues a long line of arbitration overturning firings of officers who wrongfully use deadly force, or otherwise take actions often targeted at communities of color.

–Officer Scott McCollister, who was suspended for six months after shooting and killing African American Kendra James in 2003, was reinstated with back pay;

–Officer Douglas Erickson, who shot and wounded African American Gerald Gratton in the back in 1993, was reinstated;

–Officers Craig Ward and Jim Galloway, fired for tossing dead opossums on the porch of a black-owned business in 1981, were reinstated;
and

–In one case where the victim, Dennis Young, was white, Lt. Jeffrey Kaer was reinstated after being fired for shooting and killing Young in 2006.

The apparent racial bias of the arbitration system comes in the midst of a national debate on racial profiling, sparked by the shooting of teenager Trayvon Martin in Florida. Like Keaton Otis, an African American man shot and killed by Portland Police less than four months after Campbell, Martin was deemed suspicious for wearing a hoodie. Other cases that have prompted protests have included those of Michael Brown in Ferguson, MO, Eric Garner in New York, Tamir Rice in Ohio, the death in custody of Sandra Bland in Texas, and too many others to count.
picture from Portland State University files

.. many in the Albina Ministerial Coalition, members of Copwatch and activists all over town do not see this as over.  We want Justice For Aaron Campbell

December 31 2015, the Albina Ministerial Alliance (AMA) Coalition  for Justice and Police Reform will held a picket line and news conference to protest the Oregon Court of Appeals' ruling that the City must reinstate Officer Ron Frashour to the Portland Police Bureau (PPB). Frashour shot the unarmed Aaron Campbell in the back in January, 2010 and was fired later that year. The action took place at 11:30 AM on the 4th Avenue side of City Hall, between Madison and Jefferson Sts. The Coalition demands that Frashour be assigned to a job or shift at the Bureau that requires the least contact with the public as possible, because of the potential that he may do harm to community members.  There has been a history of officers with problems being assigned to desk jobs and other areas of the Bureau to minimize their interactions with the public.  The Coalition protested the Arbitrator's decision in April, 2012, and applauded the City's decision to file an appeal, asserting their right to make such personnel decisions.  The reinstatement of Frashour continues a long line of arbitration overturning firings of officers who wrongfully use deadly force, or otherwise take actions often targeted at communities of color.

R D Hardesty
The decision to terminate Frashour was not unique. Portland City Council has ordered officers fired before, for being out of policy. IN EVERY INSTANCE the officer has been returned to duty. Neither the arbitration clause the city offers, in contracting with the Portland Police Association, nor the underlying policies and procedures by which bad cops get returned to the force have been amended. Like your own local authority perhaps, Portland offers a semblance of civilian control of police ... while, in fact, allowing the police to exonerate themselves. When the self-exoneration process fails, and public demand for a firing stirs Commissioners to act, politicians offer the public the appearance of oversight ... without actually having to risk the ire of the police union. Officers are re-instated with back pay. It's not really a disincentive to poor conduct. And it is a structural fail-safe mechanism allowing police to act egregiously, knowing they will not be held accountable for homicide, let alone lesser infractions.﻿

For more information visit the AMA Coalition website at

Coalition for Justice and Police Reform