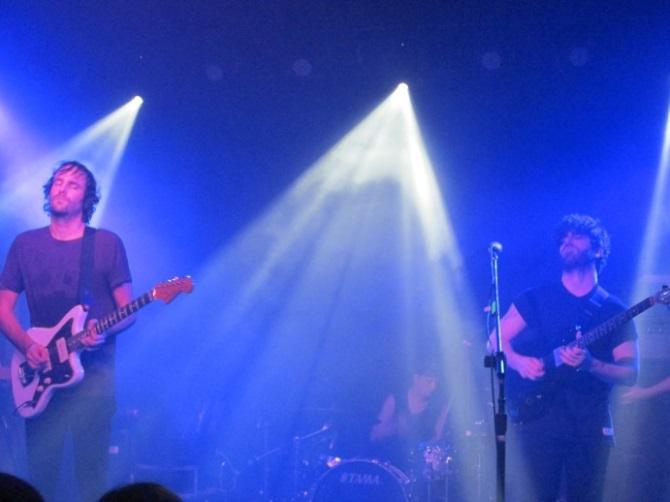 The Foals – In Concert, Portland,
December 2013

What kind of music do you get from a band influenced by Nirvana and the Talking Heads and the Aphex Twin genre of electronic music, a band also influenced by folk, metal, jazz, and gospel music? You get music by The Foals, a band from Oxford, England. They appeared in concert in December at Portland’s Wonder Ballroom as part of Portland station KNRK-FM’s annual December to Remember concert series.

The Foals delighted a capacity Portland crowd with their music. A mosh pit arose for several songs. Lead singer/guitarist Yannis Philippakis left the stage and walked through the densely-packed crowd during another song.

Philippakis was born in Greece to a Greek father and South African mother of Ukranian descent. Philippakis met one of his band-mates at a cocktail bar; the other three members met in art college in Oxford.

Highlights of the Foals’ Portland show included rousing renditions of “Inhaler” and “My Number” off of the Foals’ 2013 release “Holy Fire.” They also performed “Two Steps Twice” off of “Antidotes” their first, 2008, release by Seattle’s SubPop Records. Other highlights included the song “Olympic Airways” off of “Antidotes” and “Spanish Sahara,” from the band’s second release, “Total Life Forever.” “Spanish Sahara’s” haunting lyric of “I'm the fury in your head, I'm the fury in your bed, I'm the ghost in the back of your head” stays with a listener. The band’s release of the single “Spanish Sahara” included music from the London Contemporary Orchestra.

Philippakis has described “My Number” as having a funk groove, in the style of the late soul/funk legend Curtis Mayfield. It is a bit of a romance ballad, speaking of longing, set to electronic beats, and features the lyrics: “We don't need the city, the creed or the culture” and “We can move beyond it now,” with a catchy refrain “I don’t need these city streets . . . .”

“Inhaler” tells someone to back off, talking of “sticks and stones,” followed by the haunting refrain: “So can you not go away, if just for one day . . . . ” The song successfully rolls from mellow sounds to hard-edged rock and the lyrics “War sounds in you, Don’t throw your fortune away . . . .”  Some of the song’s sounds seem like an electronic version of popcorn popping, beautiful and rhythmic, ethereal and memorable. 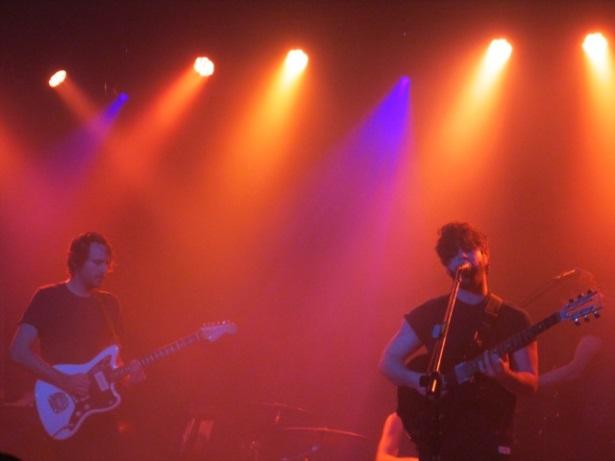 “Olympic Airways” talks of disappearing, moving away, reappearing, and building an aviary, in a very catchy and melodic tune. The band’s video for “Olympic Airways” includes post-apocalyptic scenes of the band and urban decay in a forest, a burn barrel, tossing a television in the air, and balloons floating away.

The start of “Two Steps Twice” has a beautiful electronic rhythm slightly reminiscent of The Who’s 1982 “Eminence Front.” The song is then magically melancholy yet catchy, with chanting and lyrics about sunsets and swimming.

The Wonder Ballroom stop was the first in a Foals’ U.S. blitz tour of 13 shows in 9 states in 15 days. The simple but elegant colored lights used on stage at the concert nicely accented the Foals’ music. Philippakis commented from the Wonder’s stage that the band was jet-lagged, having just arrived in North America. It did not show in their Portland performance, though. Their energy was fresh, and intense. The band tours extensively: in the spring of 2013 they performed in 20 different states in the U.S. – including at the Lollapalooza and Coachella Music Festivals; other 2013 concerts were in Australia, Belgium, France, the U.K., Canada, Mexico, Chile, and Brazil. The Foals’ 2014 tour stops in Ireland, the U.K., Holland, Thailand, Japan, Malaysia, and South Africa, and back in the U.S., in Richmond.

The Foals debut album, “Antidotes,” debuted at number 3 on the U.K. charts in 2008. Since then many accolades have followed. “Spanish Sahara” was featured on the critically-acclaimed U.K. television series “Skins” and also won the best track of 2011 award by New Music Express (NME) magazine. NME awarded “Inhaler” the best new track of 2013. NME readers picked “My Number” as their top 2013 song and “Holy Fire” as their top 2013 album. “Holy Fire” reached no. 2 on the U.K.’s album charts and number 1 in Australia. “My Number” and “Inhaler” both reached number 20 in the U.S. on Billboard's alternative music list in 2013. The Foals received the best live act award of 2013 at the U.K.’s Q awards.

Lead singer Philippakis said in a 2013 interview of the Foals in Australia that "We need to explore different palates . . . .” He added that the Foals’ music had a “diversity there that we relish." The Foals are worth checking out. They continue to grow. They beautifully enrich and expand today’s music with their catchy melodies. 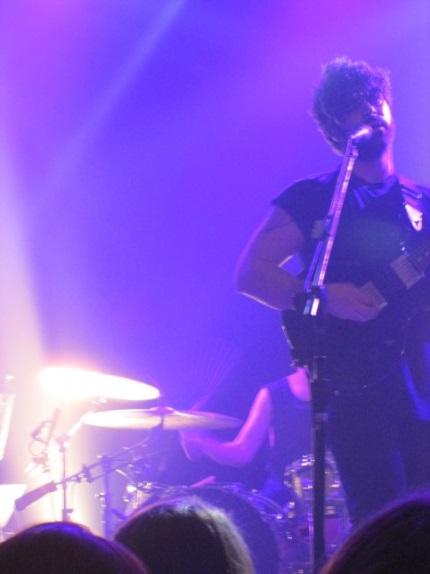 Larry Cwik is an artist, photographer, and film-maker in Portland.

Yannis Philippakis of The Foals, in concert at the Wonder Ballroom, Portland, December 2013; photograph: Larry Cwik

You are cordially invited to see the Portraits 2 exhibit in downtown Portland at the Mark Woolley Gallery.  The show just opened today.  It runs through March 1, 2014.  I have three large photographic images in the show, all from my project Mexico, A 30 Year Journey.

There will be a reception for artists and friends next Wednesday February 5th from 5 - 9 pm and I will be present from 7 - 830 pm - you are invited.
Two of my works shown in the exhibit have never been exhibited in Portland before.  Am happy have my work in the company of many other artists whose work I admire, such as painters Sandy Roumagoux, Melinda Thorsnes, Paul Soriano, Weslie Younie, Angelina Woolley, Walt Curtis, and Karen Wippich; along with drawings by Tom Hardy and Terra DeHart; and work by several talented photographers including Pedro Farias-Nardi.
Hope you can see the show while it is up and please stop by next Wednesday for the opening, with refreshments, if you are able.
Larry :-)
www.larrycwik.com
Facebook: https://www.facebook.com/pages/Larry-Cwik-Photographic-Fine-Art/230113190400324
When: Gallery open 12 - 6 from Thursday through Sunday; artist and friends of artists opening on Wednesday February 5th, 5 - 9 pm.  I will be there from 7 - 830 pm on Feb. 5th.
Where: 700 SW Fifth Avenue, downtown Portland, Pioneer Place Mall, Third Floor