Cost  THIS EVENT IS FREE and OPEN to the public, including all MU students, staff and faculty.

Portal at the Portland Alliance http://www.ThePortlandAlliance.org/cornett

Have You Experienced?   – The Website of Professor Norman Cornett's Dialogic Sessions

Employing the 'dialogic' philosophy of education to explore the arts

“I first met Dr. Cornett in 2008, as an observer during his dialogic session with Montreal writer Rawi Hage, and Hage’s celebrated and challenging novel, Cockroach. The class took place in an art gallery on Montreal’s Sherbrooke Street. The session I witnessed was riveting, bold, argumentative, engaged, profound, and endlessly fascinating: the kind of conversation I believe that art both provokes and necessitates..."
from:  https://haveyouexperienced.wordpress.com/ 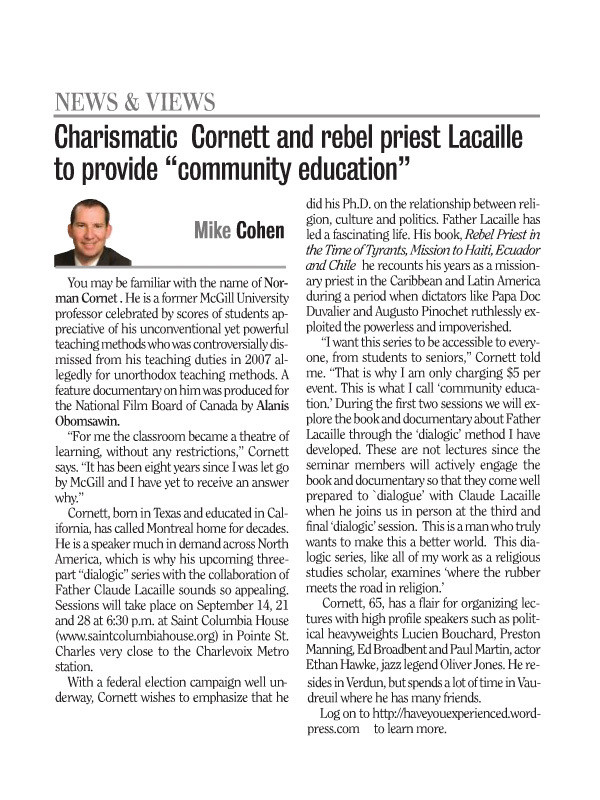 and playwrights.  "Indeed I translate literary works from French

into English. Please see this brief public reading of a book I translated

which has now appeared in print and garnered critical acclaim:

click here to view the video.
Or alternatively in this format:
You may view and/or download the video from here.

New Wine, New Wineskins at Multnomah University is proud to host a public screening/discussion of the documentary “Professor Norman Cornett: Since when do we divorce the right answer from an honest answer?” on November 2, 2015.

Professor Cornett is a specialist in theology and culture, particularly theology and the arts. He developed a method of teaching which he calls, “dialogic, ” that uniquely engages students’ creativity. He lost his job at McGill University over the impact of this methodology, and his former students rallied around him.

Professor Cornett’s innovative views on learning are portrayed in “Professor Norman Cornett,” a documentary by Alanis Obomsawin, one of Canada’s most distinguished filmmakers. The National Film Board of Canada released the film in 2009, and it now screens in universities throughout North America and Europe. Immediately after the showing at MU, Professor Cornett will lead a “dialogic” discussion with audience members, fielding questions and speaking about his unique vision for education.

THIS EVENT IS FREE and OPEN to the public, including all MU students, staff and faculty.

A graduate of the University of California, Berkeley, where he earned a BA with distinction in history, Norman Cornett came of age amidst the counterculture fervor of the ’60s. He completed a PhD. in church history at McGill University, going on to teach there for 15 years as a lecturer in the Faculty of Religious Studies. Employing creative learning methods, he used his courses to address complex issues ranging from palliative care and jazz improvisation to First Nations history and Afghanistan. Professor Cornett lives in Québec, Canada. Learn more about him on his website.