A MORAL AGENDA BASED ON FUNDAMENTAL RIGHTS

Over the past two years, the Poor People’s Campaign: A National Call for Moral Revival has reached out to communities in more than 30 states across this nation. We have met with tens of thousands of people, witnessing the strength of their moral courage in trying times. We have gathered testimonies from hundreds of poor people and we have chronicled their demands for a better society. The following moral agenda is drawn from this deep engagement and commitment to these struggles of the poor and dispossessed. It is also grounded in an empirical assessment of how we have come to this point today. The Souls of Poor Folk: Auditing America report reveals how the evils of systemic racism, poverty, ecological devastation, and the war economy and militarism are persistent, pervasive, and perpetuated by a distorted moral narrative that must be challenged.

We must stop the attention violence that refuses to see these injustices and acknowledge the human and economic costs of inequality. We believe that when decent people see the faces and facts that the Souls of Poor Folk Audit presents, they will be moved deeply in their conscience to change things. When confronted with the undeniable truth of unconscionable cruelty to our fellow human beings, we must join the ranks of those who are determined not to rest until justice and equality are a reality for all.

This document is organized in two parts:

On Thanksgiving Day (and National Day of Mourning,) former chair of the San Carlos Apache, Wendsler Nosie Sr, left their reservation and began his return to the Apache holy site of Oak Flat (Chi'chil Bildagoteel) in Arizona.

Oak Flat is under threat of destruction by Resolution Copper, a joint venture owned in part by Rio Tinto, one of the largest metal and mining companies in the world. Wendsler, with the blessings of the Apache Stronghold, has decided that he will not leave the sacred site until it is protected, and his tribe's Constitutional and moral rights to religious freedom are respected, even if it means losing his life. National Co-Chair and President of Repairers of the Breach, Rev. Dr. Barber, along with Rev. John Mendez, Rev. Dr. Robin Tanner, and Ms. Yara Allen were present as he started this journey home.

Sign the petition today to protect this sacred land. 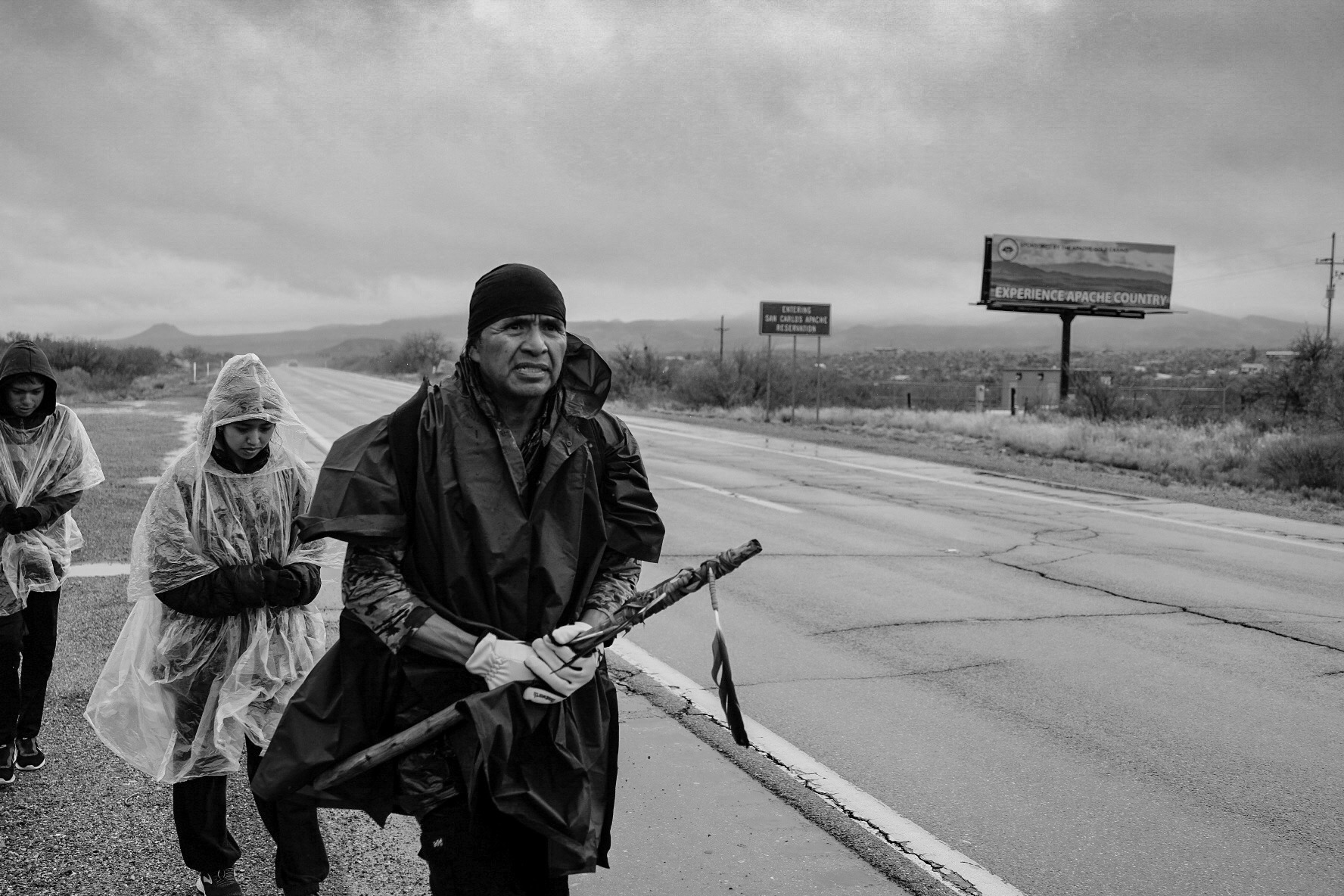 In the Apache tradition, the waters at Oak Flat are the source of all life. Generations of Apache have come to pray for thousands of years at this most holy site. After years of unsuccessful negotiations and a corruption scandal that landed an Arizona Congressman in prison, Resolution Copper was given the rights to mine Oak Flat as part of a last-minute rider that then-Senator John McCain added to the 2014 Defense Spending Bill. To process the copper ore, the proposed extraction would use 6.5 billion gallons of water annually - as much water as a small city - which would then be polluted with sulfuric acid. These operations would replace the holy ground with a gaping crater, two miles wide and one thousand feet deep.

The only thing standing between Resolution Copper and the mining rights they have already been granted is an Environmental Impact Statement (EIS). The EIS must be certified by the federal government before private companies can begin mining public lands. During the required public comment period on the EIS, Wendsler argued that, while the environmental impact of this proposed project would be devastating, the bigger issue is in fact religious liberty.

In a joint statement with the current San Carlos Apache Chairman Terry Rambler, Wendsler wrote, “the Oak Flat Draft Environmental Impact Statement does not address the current religious significance and the value given to Oak Flat by the Apache people, Yavapai people, Aravaipa and many others...Native American Religion has been excluded from the areas of concern and value.” However, the U.S. Forest Service has refused to consider the Apache's religious freedom claim in its EIS.

Two weeks ago, Wendsler and a delegation from the Apache Stronghold went to Washington D.C. to meet with the U.S. Forest Service and deliver the statement of his intent to return to Oak Flat. They were joined by Rev. Barber, Rev. Theoharis and a delegation of multi-faith clergy.

Rev. Dr. Barber was introduced to Wendsler seven years ago by Rev. Mendez, who has been engaged with the Apache Stronghold for over twenty years. Since then, they have built a relationship across faith, race, issues, and geography, to find common ground in this sacred and moral struggle.

Wendsler is a member of the National Steering Committee of the Poor People’s Campaign. Along with a delegation from the San Carlos Apache, he joined the December 4th, 2017, official launch of the Campaign in Washington D.C. And in June 2018, following a sacred journey connecting with indigenous people across the country, the San Carlos Apache joined the Campaign in Washington D.C. for the 40 Days of Action. There on Capitol Hill, Vanessa Nosie, Wendsler's daughter, spoke to the conditions they had witnessed on their journey.

The Poor People’s Campaign now calls on all of the people in our movement to support the Apache Stronghold in their struggle for religious freedom and the right to their sacred lands at Oak Flat.

In Rev. Barber’s and Rev. Theoharis’ words, “As Christian ministers who are committed to the freedom of religion for all people, we call on all people of faith to stand with Wendsler Nosie and the Apache Stronghold before it is too late. To preach the resurrection of Jesus is to proclaim that no one and no one’s tradition must be crucified for the greater good. We can protect the waters, protect Oak Flat, and still have enough resources for every family in this land to flourish. The history of terrible violence this nation has committed against indigenous people from the Trail of Tears to Standing Rock is a reminder that the apocalypse Nosie goes home to face is a real possibility. But it is not a necessity. We pray Americans will act to show genuine gratitude for the original stewards of this land and their religious freedom. We join our brother, Wendsler Nosie, in the call to save Oak Flat.”

Support this critical struggle by signing the petition and please consider making a donation to the Apache Stronghold at this pivotal moment.

A Scientist Who Resisted Trump Administration Censorship of Climate Report Just Lost Her Job  “I wouldn’t do anything different, but Jesus, this is stressful.”