Of, By and For The People
|About Us | Subscribe | Contact Submission info | Volunteer
Speaking Truth to Power Since 1981 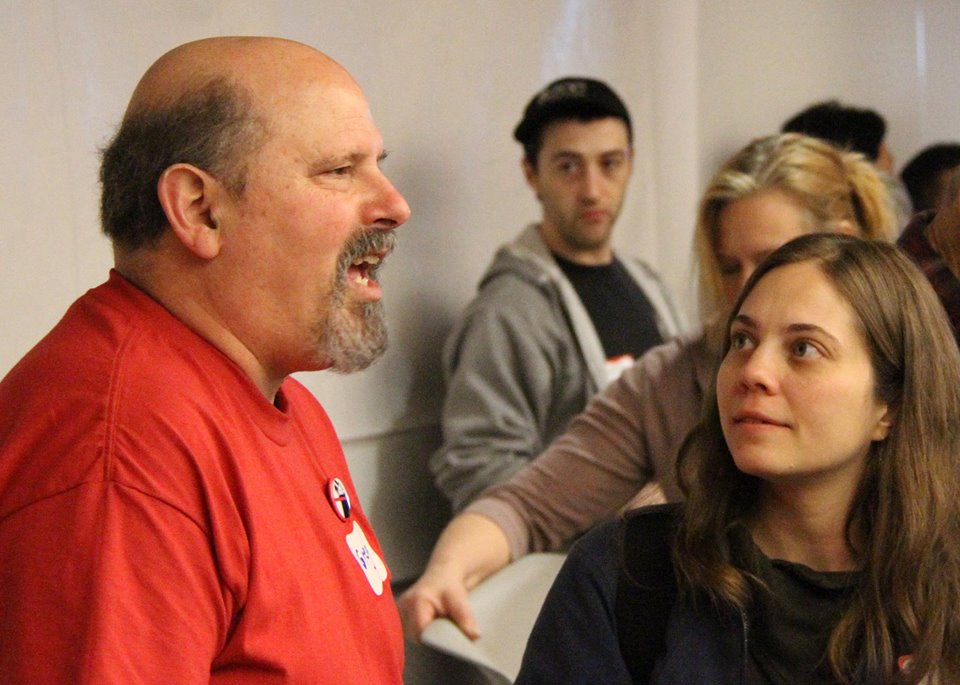 The "Justice for All" annual dinner/fundraiser for JOBS WITH JUSTICE was a great success and fully attended by several hundred people. 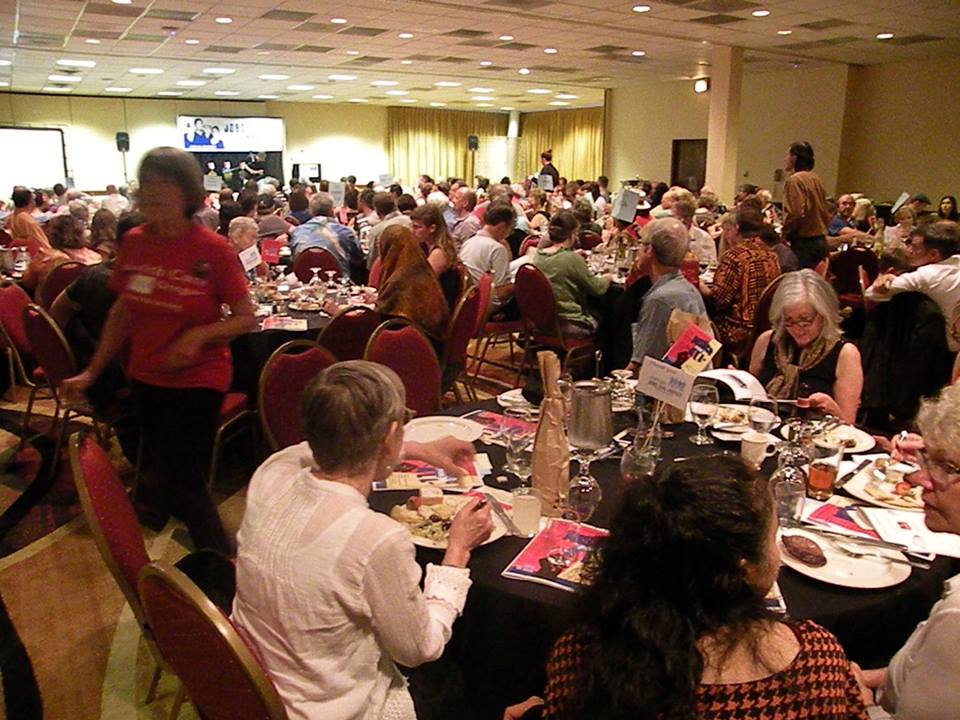 (Above Picture courtesy of JWJ)
Activists associated with partner organizations
were also honored -- with the collective positive
energy of the gathering serving to boost my spirit
and encourage many others who are seeking to
make this world a better place.

Event at a Glance

Calling all troublemakers! From teachers to bus drivers, retail workers to government employees, farm workers to nurses, we are rebuilding solidarity while fighting for a better world for working people.

The Labor Notes Troublemakers School is a place for troublemakers of all kinds—community organizers, union shop stewards, and labor activists—to come together for a day of skill-building workshops and strategy discussions to create a stronger workers’ movement in Portland.

(It's closer than you think! Five minutes from I-5, and just 20 minutes from downtown Portland. Click here for directions.)

- See more at: http://labornotes.org/pdx#sthash.06z0SksG.dpuf
“What happens to a dream deferred?” 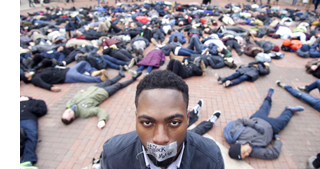 years ago in a poem simply entitled: “Harlem.”

More than a half century later the dream is still deferred, the site is Baltimore and the prophetic voice of the poet still asks what happens when another generation of dreams becomes deferred, “does it sag like a heavy load” or “does it explode?” These are extreme times during which the growing disparity in terms of wealth and opportunity adds fuel to the fires of despair every day.

Laws and rules may tell us how to live; but a person must have a why to live. In the soul of America, the why to live has best been imagined as a dream. Not the simple “American dream” of blind materialism; but the wild complexity of dreams trying to live through the great diversity of souls that makes up the America that has not been yet.

Keaton Otis was a young Black man murdered by the Portland police three years ago. The police admitted they stopped him for “looking like a gangster.” His father, Fred Bryant, has held a monthly vigil every month on the 12 since his son’s murder in his struggle for justice for three years, on the spot where Keaton’s life was taken.

Please join that struggle this month and help to spread the word.

Keaton Otis was a young Black man murdered by the Portland police three years ago. The police admitted they stopped him for “looking like a gangster.” His father, Fred Bryant, held a monthly vigil every month on the 12th since his son’s murder. The vigil took place in a struggle for justice for three years, on the spot where Keaton’s life was needlessly taken.
And we continue the struggle.

Please join us with that struggle this month and help to spread the word: blacklivesmatter 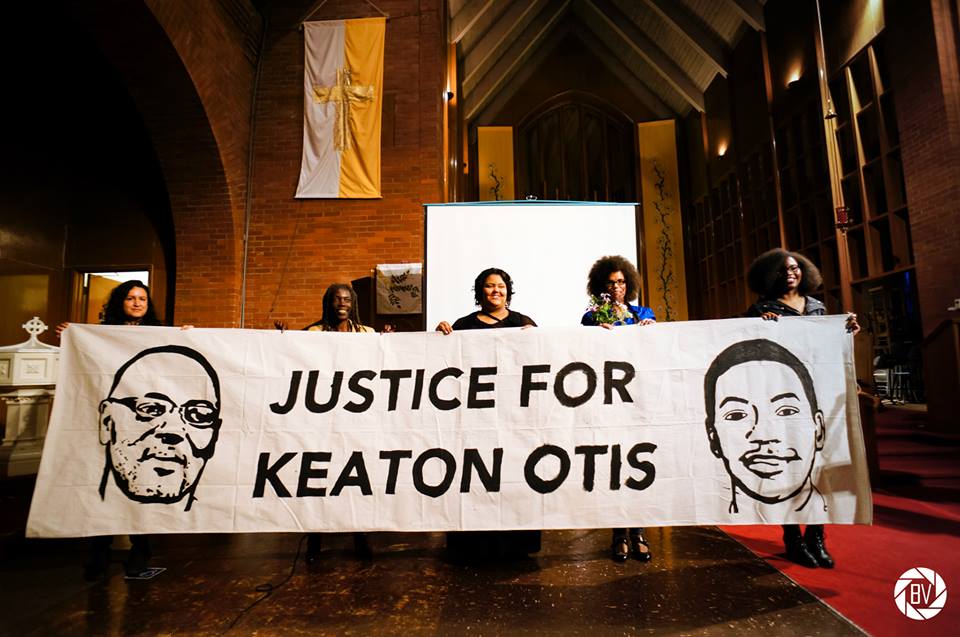 We come to mark it on our calendar every year.

It comes as the annual chance to bring issues together,
meet and greet and have an action that is often more about
getting re-energized than about getting something done.

This has gotten many May Day actions locally criticized for taking a huge amount of time, energy, and money, yet not resulting in movements that are any stronger. However, the last two years have really started to buck this trend, with last year really drawing issues of immigration together with the high profile fight between the ILWU and United Grain. This year Portland joined with cities around the country in identifying an overarching theme that effectively dominated the messaging: Black Lives Matter.

A Portland Policeman's Memoir
"Behind the Badge in River City" by Don Dupay.
Depicting the aura of the Police department
from the early 60's to the late 70'...
Published on Jun 1, 2015  Checkout this interview
http://www.ThePortlandAlliance.org/dupay

Who Are the Nuclear Scofflaws?

Given all the frothing by hawkish U.S. Senators about Iran’s possible development of nuclear weapons, one might think that Iran was violating the nuclear Non-Proliferation Treaty (NPT).

But it’s not. Beyond the Drone Debate: Should US Military and CIA Be Judge, Jury and Executioner?

Adam Hudson, Truthout: After it was revealed that two Western hostages held by al-Qaeda were killed in a US drone strike in January, public debate centered on the method of targeted killing - drone strikes - rather than whether assassination was legal, moral or effective policy.

Police Body Cameras: A Tool for or against the People?

Oregon legislators to put video evidence from body-worn cameras SOLELY in the hands of police. Were this a police accountability tool, you’d expect broad access to the evidence.  Broadcasters and the press are the only voices in opposition.  Please consider this information and contact your representatives, senators and community leaders.

On 10 December 2014, Consult Hardesty partners derailed an attempt by the Portland Police Bureau to slip a nearly million-dollar spending proposal past our City Council. Pretending to merely solicit information, PPB intended to commit to purchasing body-worn cameras. We provided the above screen shot of the proposed bid, scheduled to drop five days following the close of the meeting.

Voting to table the police proposal, Commissioner Dan Saltzman observed, “It does seem to me we’re putting the cart before the horse. We have not received any legislative protections for what can be released to the public or to the media.”
He followed fear-of-exposure with political analysis: “I’m not so sure when the legislature is going to provide us those protections, because I know how powerful the Oregon newspaper association can be.”

Saltzman was well aware that police agencies throughout Washington State had put their body-worn camera programs on hold. Silicon Forest software geeks had exercised their legal right to see the public record. Eric Rachner won more than $60,000 in settlements after suing Seattle PD for lying, and withholding video of his bogus arrest for playing Frisbee. He reinvested the money, formed the Center for Open Policing (SEACOP), and the nonprofit won $23,000 after Washington State Patrol lied about dashcam video of an aberrant traffic stop. “Through their shrewd use of Washington’s Public Records Act, the two Seattle residents are now the closest thing the city has to a civilian police-oversight board,” reported the Washington Post.

The idea of police oversight is anathema to Portland City Council. They fear it. The City paused in its desire to grab a share of Obama’s $75,000,000 for body-worn cameras … to lend its lobbyists to those of the immensely profitable Taser and law enforcement proponents, and carve loopholes in Oregon’s vaunted open records laws. …Taser isn’t just targeting Oregon: “Lawmakers in at least fifteen states have introduced bills to exempt video recordings of police encounters with citizens from state public records laws, or to limit what can be made public,” reports the Guardian.

The plan is not to improve transparency in policing.
Find out more at:
www.ThePortlandAlliance.org/consulthardesty

A Portal to Consult Hardesty

"People have only as much liberty as
they have the intelligence to want and the courage to take.”
Emma Goldman

The Peaceresource Endorses The Grateful Dead!