Israeli warplanes pound Gaza strip
09 Jul 2014 Israeli warplanes have pounded targets in the Gaza strip ...  leaving 28 people dead and more than 100 wounded. ... The deaths brought to 28 the number of fatalities since the launch of Israel's Operation Protective Edge early on Tuesday, with the Jewish state not ruling out a ground operation to stop the rocket attacks. (Editors' Note... This military assault on civilian
targets in Gaza is a form of collective punishment.   tmf)

"Unless and until the Obama administration decides to end its unconditional backing for Israel's right-wing government and
instead support Israeli and Palestinian moderates, there will
be no hope for peace." 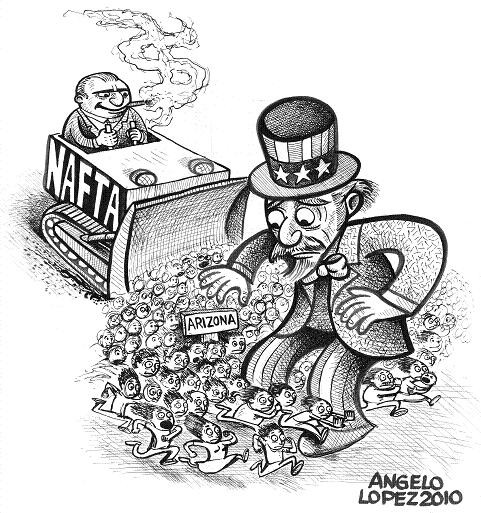 Justice Ruth Bader Ginsburg penned a blistering dissent to the Supreme Court's 5-4 ruling that the government can't require certain employers to provide insurance coverage for methods of birth control and emergency contraception that conflict with their religious beliefs.

No Strikes. No Troops.
No War in Iraq.
http://www.ThePortlandAlliance.org/commondreams

We are mistaken about Iraq

“Those Iraqis have been fighting each other for centuries,” a friend
recently said to me.  I have heard this mistaken view too often.

I told him I had been to Iraq nine times, all before the 2003 U.S.
invasion of Iraq.  Not a single Iraqi ever said to me, “You need to
know I'm Shiite” or “I should tell you I'm Sunni.”  Not doctors, not
taxi drivers, not hotel staff, not families we visited.  Baghdad had
many mixed marriages of Shiite and Sunni, as well as mixed neighborhoods.  An Iraqi-American friend confirmed that often
people didn't know the religious sect of their neighbor
– or if they did, they didn't care.

Peace prevailed in the neighborhoods.  What happened?

Bill Bigelow, an educator from Oregon, similarly writes about the need to
understand the truth of our history and how social change occurs and to
teach it in our schools. The United States has become that from which it
originally sought to separate itself: an Empire.

Class War Films provides a new short video history
of American Empire in which it states that the
function of empire is as follows: “It is by violence abroad and deception and repression at home to enrich the ruling class at the cost of the utter
ruin of its society.”

The Disintegration of Iraq Has Begun

Iraq was a creation of the British following World War I out of disparate Ottoman provinces that had never had any coordinated existence. It is now on the verge of disintegration, thanks to the misguided policies of the American Bush/Cheney administration. President Obama is being pressured by his Republican critics to “do something” about this. But anything he does will only make matters worse. http://www.ThePortlandAlliance.org/beeman

Jul 1, 2014    Dozens of protesters carrying signs and banners
marched inside a Staples store in Northeast Portland June 20,
where they attempted to present a petition signed by 500 Portland residents who have pledged to boycott the office supply stores.
The protesters are angry because Staples signed a no-bid,
sweetheart deal with the U.S. Postal Service to staff postal
counters inside its stores — at the same time the USPS is
eliminating public post offices and reducing work hours.